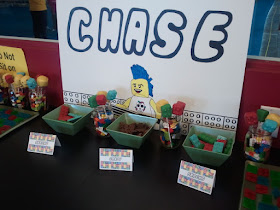 My son, Chase, like just about every other nine year old in the US, LOVES Legos. They dominate his room. And the rest of the house really. Have you ever stepped on one of those in bare feet? It will make you believe death by Legos is a real thing. Well Chase of course wanted a Lego themed birthday party. It was a lot of work, but I think it turned out great. I was of course an over achiever so there is a couple things I wanted to do that I didnt end up acomplishing, but the party was a great success and most important, Chase loved it! 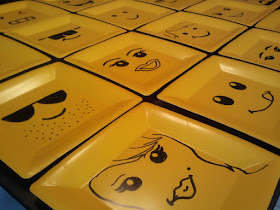 I would say the funnest thing I did for the party was the Lego plates. I just bought plain yellow square paper plates at Party City. I looked up 'Lego Faces' on Google Images and voila. Tons of faces to choose to draw on them with a fat black marker. It was honestly really fun. I tried to use Sharpie brand markers at first but there must be something not compatible with those and these plates. The black wasnt consistent and would swipe itself away. A good ol Paper Mate black permanent marker worked fabulous. Used it on every plate and the foam board seem above. They were so fun to draw! 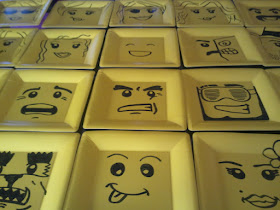 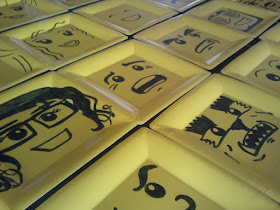 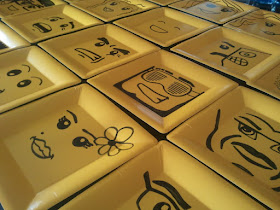 The girls were the funnest but the hardest to draw, purely because there is not a ton of female Lego faces out there. There is the new line of Lego Friends for girls that are cute, but they do not have the same look as original Lego mini-fig faces. So I had to take the basic female eyes and mouth and make a few up as I went along. Kinda fun that way anyway! 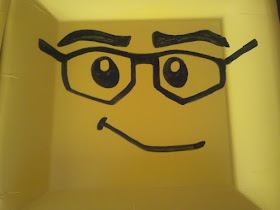 My sons favorites, of course this one, designed to look like him! 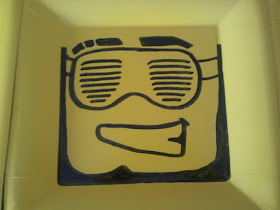 Another one of the kids favorites. 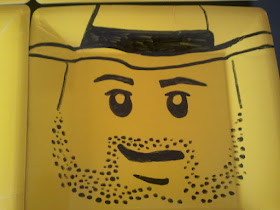 Lego Indiana Jones! Sigh, if only Harrison Ford had reallly been at the party..... 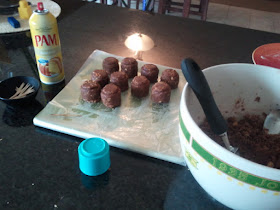 Making the Lego cake pops was definitely a bit of a challange. Mostly because I didnt have perfect cookie cutters to use as a shaper for the pops themselves. For the squares I put all the cake pop mix into a square metal baking pan and firmed it down as well as I could. I then let it cool and firm up in the fridge like that and cut out squares with a knife. I am sure there is a better way of doing this that would produce more angular square edges, but hey, this worked for me without having a cookie cutter supply store right next door. So they turned out pretty well. I just put the remaining candy coating into a Make N Mold squirt bottle and squeezed out VERY little dots on top of the cake pop squares for the Lego square look. Worked pretty good, very easy. Comes out so fast you dont even need to squeeze it! 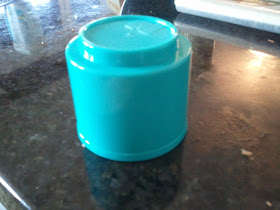 As for the Lego Mini-Fig heads, they were definitely more on the difficult side. I looked all over town for something to use as a mold for the head shape. Nada. Couldnt find a thing. Not that I went to an actual cake supply store. That would have been too smart. Besides, as I was sitting in my living room picking up my daughters toys, I came across this lil guy in the picture. Gave it a good look and realized it was the exact shape of a Lego Head, top and all. So I lubbed up the inside of that baby good with Pam and shoved some cake pop batter in. Worked great. They were a little wider and shorter that I would have liked but I used my hands to shape em up right. 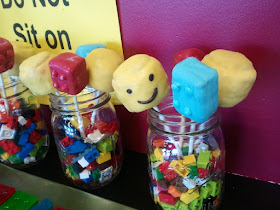 Now after I started dipping these things in the coating I discovered they were WAY too big and heavy for the dipping stick to handle well. I managed to get them all on there and only dropped one off the stick into the candy coating (dont worry, I saved him!) but next time, I am going to search every corner of this earth for a smalled but similar device to mold with. I ended up using black icing for their faces again because once again the edible ink pens would not work on the candy coating. I am going to start ordering it online instead of buying it in stores. See if the quality is better. But the smiles turned out ok. I wouldnt recomend em for traveling anywhere because a lot of the dang faces touched each other and smeared on the way to the party location, but looks and works great if you are serving them the same place you made them. A few faces survivied and they looked and most importantly tasted great! 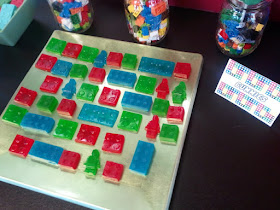 I ordered these Lego molds from Amazon.com and they were AWESOME. I love them, going to make Lego candies and gummies just for no reason all the time now! Its so easy. The plastic one makes larger and thinner Lego shapped pieces and the silicone ones make the more exact sized Lego pieces and perfect Lego Mini Figures. Easy as pie on the chocolates, just melt the candy coating and pour it in. Sit it in the fridge. That is it. Easy as pie. Or shall we say easy as chocolate pie. Now the Lego gummies are easy too but take just a bit more time. All you need to fill up both of the silicone molds is one box of jello, 2 envelopes of unflavored gelatin (its right next to the Jello at the store) and water. You pour 1/3 cup of water, the Jello, and the 2 envelopes of gelatin in a small sauce pan. Let it sit for 5-10 min together then put the pan on the stove over medium heat stirring for just 2-5min. Remove it, let it cool just one min, pour it into the molds, and pop it into the fridge. Makes some awesome gummies! 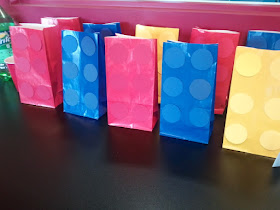 This was a very easy idea I had seen on pinterest. Just buy the basic color plain goody bags and some matching color scrapbook sheets. I used that same little toy of my daughters to draw the circles on the paper, dang that thing came in handy! It took us forever to cut them out and I so owe my friend Beth for having a few drinks with me as we cramped out scissor hands cutting those little guys out! Would have been up to 4am without her! So just tape em on the outside of the bag and voila, Lego Goody bags! 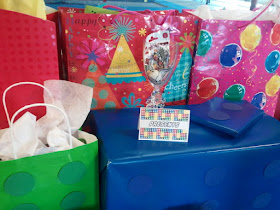 We wrapped Chase's gifts from us in basic color wrapping paper. That is one of the best things about doing a Lego themed Birthday party. Lego's are all the primary basic colors so all the supplies you need are usually the cheapest at the store because usually kids want the printed character stuff. Score for Lego! So I applied the same thing to the presents as I did the goodie bags. Taped on paper dots to give the impression of a big Lego. I also cut out some dots for a couple gift bag items that were not easily wrappable. 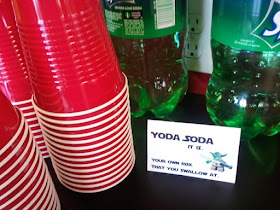 I found the recipe for Yoda Soda online. Not really exsclusively for Lego parties but my son is such a fan of the Lego Star Wars line and I thought it looked so fun that I printed up a label with Lego Yoda on it and there ya go, works for the Lego party. It was a HUGE hit with the kids. There were some more complicated recipes on the net but the one I chose was just Sprite and Lime Sherbert. Its very cool, you just put a scoop into the bottom of the cup and pour in the Sprite. It bubbles and kinda froths up and the lime color kinda glows through. The kids loved it, they all asked for seconds!
All in all it was a great party. I really enjoyed making all the stuff for it, it was a lot of work but Chase and the other kids really loved it as you can see below! 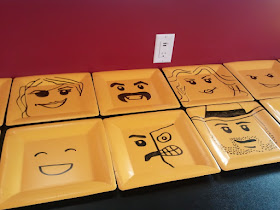 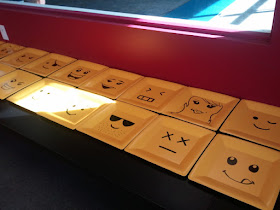 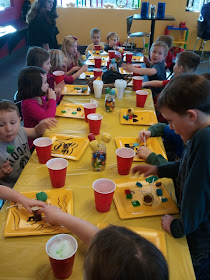 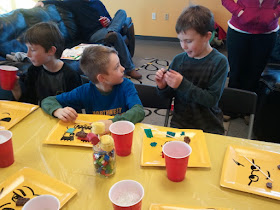 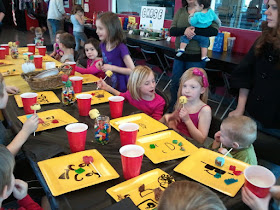